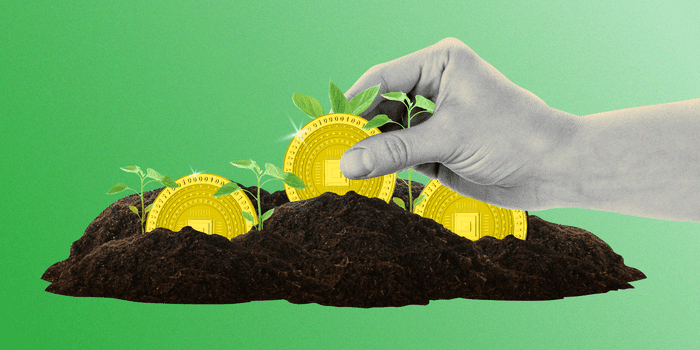 ,” for a period of time in exchange for interest or other rewards, such as more cryptocurrency.

“When traditional loans are made through banks, the amount lent out is paid back with interest,” explains Daniel R. Hill, CFP, AIF and president of Hill Wealth Strategies. “With yield farming, the concept is the same: cryptocurrency that would normally just be sitting in an account is instead lent out in order to generate returns.”

Since yield farming began in 2020, yield farmers have earned returns in the form of annual percentage yields (APY) that can reach triple digits. But this potential return comes at high risk, with the protocols and coins earned subject to extreme volatility and rug pulls wherein developers abandon a project and make off with investors’ funds.

Note: The returns you earn by yield farming are expressed as APY, or the rate of return you’d earn during a year.

Also known as liquidity farming, yield farming works by first allowing an investor to stake their coins by depositing them into a lending protocol through a decentralized app, or dApp. Other investors can then borrow the coins through the dApp to use for speculation

, where they try to profit off of sharp swings they anticipate in the coin’s market price.

by locking up their coins in a process called staking. “Staking occurs when centralized crypto platforms take customers’ deposits and lend them out to those seeking credit,” Hill says. “Creditors pay interest, depositors receive a certain proportion of that and then the bank takes the rest.”

“This lending is usually facilitated through smart contracts, which are essentially just a piece of code running on a blockchain, functioning as a liquidity pool,” says Brian Dechesare, former investment banker and CEO of financial career platform Breaking Into Wall Street. “Users who are yield farming, also known as liquidity providers, lend their funds by adding them to a smart contract.”

Investors who lock up their coins on the yield-farming protocol can earn interest and often more cryptocurrency coins — the real boon to the deal. If the price of those additional coins appreciates, the investor’s returns rise as well.

This process provides the liquidity newly launched blockchain apps need to sustain long-term growth, says Kurahashi-Sofue. “[These apps] can increase community participation and secure this liquidity by rewarding users with incentives like their own governance tokens, app transaction fees and other funds,” Kurahashi-Sofue says.

Kurahashi-Sofue adds that you could compare yield farming to the early days of ride-sharing. “Uber, Lyft, and other ride-sharing apps needed to bootstrap growth, so they provided incentives for early users who referred other users onto the platform,” he says.

Another incentive for staking is to accumulate enough shares of the cryptocurrency to force a hard fork where a major infrastructural change is made to the design of the cryptocurrency, says Daniel J. Smith, professor of economics in the Political Economy Research Institute at Middle Tennessee State University.

Note: A hard fork is a change in a cryptocurrency network’s protocol that causes blocks or transactions to be either validated or invalidated, forcing developers to upgrade their protocol software.

“Hard forks enable the holders of crypto to force changes that would, at least in the opinion of the majority of the holders, improve the cryptocurrency going forward,” Smith says. In a way, hard forking gives crypto investors a power similar to what share voting does for stockholders. The same way shareholders can vote on key matters affecting the management or direction of the companies they invest in, cryptocurrency holders can use hard forks to push a cryptocurrency protocol in a certain direction.

Staking coins to cause a hard fork “allows crypto to take on (this) important characteristic of equity investments,” Smith adds, and “moves crypto from a cash-like investment in a portfolio to a quasi-equity investment.”https://b9622395d9e39d4bd6fe2bf8e00925ce.safeframe.googlesyndication.com/safeframe/1-0-38/html/container.html

Yield farming is rife with risk. Some of these risks include:

“There’s always risk in using decentralized apps,” Kurahashi-Sofue says. “It’s all about minimizing the risk enough for you to be comfortable with using them, based on your own research. Users should always look into the team behind the application and its transparency and diligence with security audits.”

In the news: The biggest cryptocurrency theft to date involved hackers stealing $600 million from the Poly Network

While yield farming is unquestionably risky, it can also be profitable — otherwise no one would bother attempting it. CoinMarketCap provides yield-farming rankings with various liquidity pools’ yearly and daily APY. It’s easy to find pools running with double digit yearly APY, and some with those thousand-percentage point APYs.

But many of these also have a high risk of impermanent loss, which should make investors question if the potential reward is worth the risk. “The profitability of yield farming, just like investment in crypto more generally, is still very uncertain and speculative,” Smith says. He believes the potential return pales in comparison to the risk involved in locking up your coins while yield farming.

Your overall profit will also depend on how much cryptocurrency you’re able to stake. To be profitable, yield farming requires thousands of dollars of funds and extremely complex strategies, Dechesare says.https://b9622395d9e39d4bd6fe2bf8e00925ce.safeframe.googlesyndication.com/safeframe/1-0-38/html/container.html

5 yield-farming protocols to know about

Yield farmers sometimes use DeFi platforms that offer various incentives for lending to optimize the return on their staked coins. Here are five yield-farming protocols to know about:

Yield farming involves staking, or locking up, your cryptocurrency in exchange for interest or more crypto. “As crypto becomes more popular, yield farming will become more mainstream. It’s a simple concept that has been around for as long as banks have existed and is just a digital version of lending with interest for profit to the investors,” Hill says.

While it’s possible to earn high returns with yield farming, it is also incredibly risky. A lot can happen while your cryptocurrency is locked up, as is evidenced by the many rapid price swings known to occur in the crypto markets.

“As with anything in life, if something is too good to be true, it likely is,” Kurahashi-Sofue “It’s best to understand how yield farming works and all of the underlying risks and opportunities prior to participating in yield farms.”