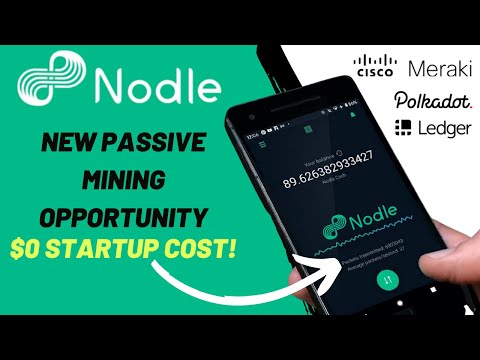 The internet of things is growing exponentially with the demand for security and connectivity growing alongside it. But the infrastructure connecting these devices is slow, unsecure and centralized.

Nodle is tackling this by turning smartphones into an internet of things gateway. In the last 24 hours over 80 million IOT devices have connected to over four and a half million smartphones on the network.

Nodle started on stellar, but moved to polka dot substrate last year because stellar doesn’t have the flexibility or scaling to go beyond the 1.4 million transactions per day, that Nodle was doing. They’re one of the first main nets already live on substrate and have a very, very high probability of getting a para chain.

If this happens, Nodle will be huge. We’re lucky to be here early.  Welcome to DeFI Now,

Nodle is a decentralized wireless network for the internet of things, with the mission of becoming the largest wireless work on earth to connect the next trillion devices. Let me give you an example of how it works. A shipping company has an IOT device on their pallets that measures temperature and vibration. This way, they can prove that during the entire shipping process, the goods remained within a safe temperature range and were never mishandled this device isn’t connected to the internet, but instead it transmits a low energy Bluetooth signal. Whenever this device is within Bluetooth range of a smartphone running the Nodle app, it sends all this information to it.

The phone will either immediately transmit the information via cell signal, or it will wait until it’s connected to wifi and send the data over the internet to the validator nodes. And they could also send location data for tracking the shipment.

The data is encrypted end to end, so it remains private and secure. So only the shipping company can access it. The shipping company is the subscriber that will pay a fee to the validators and the validators share revenue with edge nodes members. So as a contributor running the Nodle app, you can earn cryptocurrency just for walking around while your device passively runs the network.

You earn from revenue sharing and also from mining new tokens. So edge nodes are contributors who help run the network, but this isn’t limited to people who download the app from the app store. To be a contributor, a device needs to run the Nodle SDK and have occasional internet access.

Contributors can be individuals, app developers, hardware manufacturers, or other IOT devices that already have internet access.

As we move more into a post advertising world, I definitely see Nodle or something similar running in the background while you’re using a given app. That way the app developer gets paid for their work. And you don’t need to see obnoxious ads.

It’s a win-win or a phone manufacturer builds this into the hardware of their phones and can sell their phones much cheaper because each one is monetizing for them after you buy it.

This is kinda like HTC did with the exitus that came pre-installed with Nodle only in that case, the funds went to the phone user. Now imagine if Google, Apple or Samsung pre-installed Nodle and connected it to their own wallets.

That way they’d be able to significantly drop the price of their phones by running Nodle in the background when you’re not using it, this could give them a huge competitive advantage and benefit the users with cheaper phones. Nodle runs without collecting any of your own data.

Nodle doesn’t collect phone numbers, names, contacts, pictures, or any personally identifiable information from the edge nodes. Their focus on privacy and security is a big fat huge plus.

Once you authorize the nodal SDK on your device, it will quietly run in the background without causing a noticeable impact to battery or performance. One last note, there is that this isn’t limited to one way data communication. These connections can also be used to transmit data back to the IOT device to update it.

For example, going forward, this can also be used to send micro payments. Imagine all the share scooters and bikes and cities parking at charging stations and automatically paying the property owner for the electricity and space usage or picture this you’re late for work.

So your smart car sends micro payments to other cars to bribe them to get out of the way and let you pass. The white paper lists 19 different commercial use cases. So if you’re interested, you should definitely go check that out. The website link is in the description.

The Nodle network can transfer any kind of data through any kind of current or future wireless network for any use case.

Now let’s talk about how their partners are using this. The city of Paris implemented smart benches in kiosks all over the city. When people download the Paris city app, and they’re near these devices, they’re asked to answer a survey about that specific area, what they like about it, what they don’t like about it.

So city managers can track how many people are using various parts of the city and how they can improve it. Cisco Meraki is one of the largest wireless access point providers in the world, and they’re using Nodle to extend their I O T coverage outside of facilities for device tracking among other things.

Meraki tracks devices within 200 feet of their access points. And then they use Nodle to extend the coverage to the extra four and a half million active edge nodes.

Constellation brands, a fortune 500 company added Bluetooth trackers to thousands of advertising displays using Nodle through the Meraki API, they get hourly updates on where these displays are located.

They can see if their presentations are in storage or on the floor of this store as intended, make sure that they’re getting their money’s worth.

Avnet partnered with Nodle for the M1 smart wearable for COVID contact tracing last year. This device will buzz when employees move six feet of one another, and it works without a smartphone. If someone at the company tests positive HR departments can alert anyone who has been near the infected person. This is a way to get people safely back to the office. Nodle is already in conversations with governments and enterprises in the US and Europe with demand for several million of these M1 units.

I asked Micha the Nodle CEO about their ledger partnership, because I couldn’t find much on it. And he said they’re working with ledger to have their secure element manufactured into new IOT devices that require authentication or extra security. This would be especially important as IOT devices start transmitting micro-payments, ledger and Nodle on IOT. I love it.

On top of all, this Nodle has partnered with Parody and Polka Dot, Stellar, the Web Three foundation and Tandem with many more partnerships that haven’t been publicly announced yet. All right, onto the team,

I spent a ton of time looking into the team and trying to find the best way to concisely share their experience. The Nodle team invented mobile mesh networks.

They are the best in the world at networking devices directly with one another in a private secure way. I’ll cover the founders here as a start for you to do your own research.

Micha Benoliel is a co-founder and CEO. He ran his own telecom businesses since the nineties and founded Open Garden. The software company that launched Fire chat. Fire Chat was a decentralized messaging app used in the pro-democracy protests in Hong Kong back in 2014.

So the protestors could communicate directly with one another without needing cellular infrastructure. Fire chat was the largest mesh network in the world until Nodle.

Garrett Kinsman is the other co-founder. He dropped out of college to join Fire chat, then moved to India to join the Ola labs team where he created Ola play the largest ride sharing network in the world, which received 1.2 billion in funding from SoftBank and Tencent. He then moved to the us to co-found Nodle. There are 12 team members total plus some other engineers who contribute.

Nodle token distribution. Nodal cash has a fixed supply of 2.1 billion, about 850 million created at the token generation event. The rest will be mined over the next seven to 10 years.

The actual amount in circulation, when it lists will be much smaller than the 850 million, we don’t have an official listing date, but that’s why I’m making this video now so that you understand the project and you’re ready when the news is released.

This is a big project with some serious partners and a world class team. So I expect all the top launch pads to wanna do the public sale. The gold standards for polka dot launch pads right now are Polka Starter and Duck starter and Ignition by paid network also looks promising.

So I wouldn’t be surprised to see it launch on one of those. In the meantime, you can just run the app and start earning Nodle. I’ve been running it all day now, and I’ve made a whopping 0.003 Nodle cash, but that’s probably because I’ve hardly left my studio during that time. I should probably get some sunlight. The more you are out and about with your phone, running your Nodle app the more Noodle cash you will earn each day. When it comes to Nodle …….. crowds are good!

Nodle’s privacy and security focused approach is one of the things that I am most excited about. IOT devices are rarely updated, but with Nodle, they can be updated just by standing near them.

All of the IOT data is encrypted and private and they don’t collect any personal data from anyone running the edge nodes, super, super bullish on this one. And as always not financial advice links to the Nodle site and social media are below.