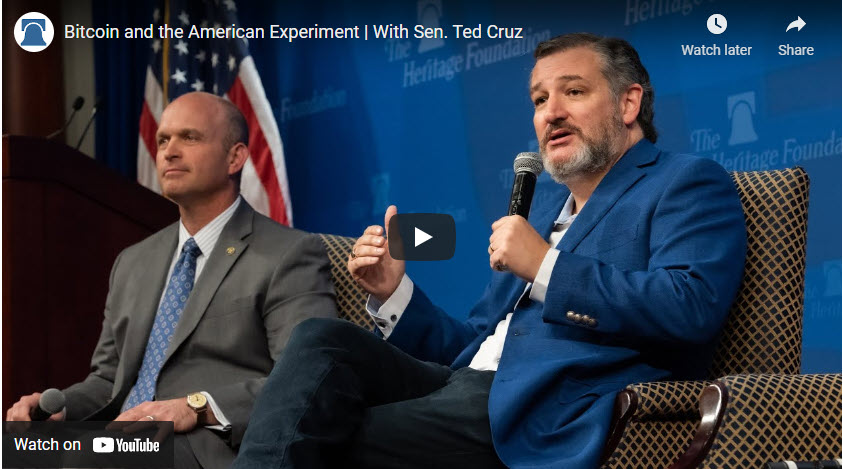 A MANDATORY VIDEO FOR ALL CRYPTO ENTHUSIST

One of the largest pieces of crypto legislation will be introduced this Tuesday (6/7). It includes definitions of which coins are commodities, coins considered securities, stablecoins, CBDC framework, and NFT direction. Let’s dive into why you should be paying attention. 🧵

We’ve been teasing it for months, but the time is almost here – a proposal to fully integrate digital assets into our financial system. Excited to finally unveil this effort next week. Stay tuned 👀 👀

Foundation hosted a panel with everyone who worked on or influenced the legislation. The biggest issue with regulation currently is US leaders don’t understand crypto. This video with 6k views was the best time investment of my week.

It was a wide ranging discussion featuring

It hits home nearly all of the largest outstanding questions across our industry. The issue is, every person on this panel HEAVILY favors $BTC

. It’s legislation being written and introduced by a group of $BTC

maxis. Horrendous for other L1’s…

So let’s dive into the panel… Well, they choose everyone’s favorite degen as the earliest set of eyes to help with direction. Michael “There is no second best” Saylor! Need I say more? https://twitter.com/BitTowne/status/1531980362368311296?s=20&t=oQZMlO9sVVRqIOycJYqd9w

We also have @tedcruz

mining Texas welcomed the miners with open arms. Electricity is cheap due to operating on a separate power grid from the rest of the nation. Miners flocked into the area over the past two years

Cruz now has massive crypto donors that operate a Proof of Work network in his state. Keeping BTC strong and alts weak directly benefits Texas… and some of his largest new donors. He states he owns $BTC

and everything else is outside his risk profile.

JUST IN: Texas senator Ted Cruz wants the state to become the epicenter of

is a blockchain consultant from Wyoming. Caitlin is a 22-year wall street vet and now the CEO of Custodia Bank. She is hoping to work with the fed to create a Custodia over collateralized stable coin. Slowing DeFi momentum is in her best interest.

instead of any other L1’s or altcoins. At one point in the video discussing altcoins she states “Burn it all down. Bitcoin will be the Phoenix that rises”.

#Bitcoin $BTC up to $100,000 – in largest cryptocurrency purchase by a sitting lawmaker to date.

The moral of the story here is anyone outside of $BTC

holders is in big trouble in the coming weeks. The first thing they call out as being decided by the legislation is commodities vs. securities. $ETH

and L1s will fall under the blanket of securities.

was able to obtain a copy of the Lummis legislation prior to next week’s final copy. By the outlined definition below, nearly every cryptocurrency including $ETH

I’ve combed through the bill but haven’t had time to cover all 70+ pages. This copy is dated March 1st so plenty of changes could have been made since shared. There is bullish content that will help progress the space surrounding stablecoin regulation and the banning of CBDCs.

Charts are backing up the evidence that we are in for a rude awakening. $BTC.D

looking ready to explode upwards by 5-30% in the coming months. 60-73% dominance could be a real possibility s/o @fewseethis

for his thoughts on $BTC

dominance. I lean on him often for charting opinions and his chart paints a similar picture. $BTC

also has just lost a 1.5-year trend and is ready to get make way to the downside.

When the penguin speaks, you listen. @Pentosh1

$ETH I thought Bearlin would originally be the lows and that we’d take the stops. We haven’t. After looking at the equal lows being left, and the monthly. I think after this rally. Things can get way worse than people expect. This looks atrocious. Bera market rallies = selling  https://twitter.com/Pentosh1/status/1475863094983335942 …

Charts seem to agree with the thesis that $ETH

and other L1’s will be classified as securities. Buckle up if you hold anything but $BTC

This has some other very interesting implications for the CEX landscape. It could also be the reason behind some of the massive headlines that have dropped lately for some of the top exchanges. Will they be forced to meet the regulations of all broker-dealers?

I found it extremely odd that @coinbase

went from flaunting it’s stack of cash to rescinding job offers in a matter of weeks. They could be getting forced to make a heavy pivot for their business in the coming months to meet regulations.

Coinbase sent a welcome email to new hires 2 weeks ago promising that they won’t rescind offers (1st image). Yesterday, they sent the rescind emails (2nd image) leaving candidates in frustration. We have a referral thread going on to help those who were impacted 👇

also making headlines for being willing to spend $1B on the upcoming election. Sending a message to both parties as they are working on this legislation possibly? The timing aligns and he isn’t spending $1B for his personal political beliefs

It’ll be interesting to see which CEX or leaders step up to push back on legislation. Gemini/Coinbase and most likely the others already have issues regarding the SEC. Who is going to step up and poke the bear? It’s going to be needed and most likely worth it.

Another hidden narrative is that the Grayscale GBTC spot ETF application response is due back from the SEC on July 7th. They’ve previously denied spot ETF’s due to things like stablecoin FUD that are cleared up in this bill.

I’d think this is highly unlikely to be approved until 2023 but if you are a hopeless bull looking for a path to $100k, $BTC

being the only commodity and a spot ETF approval is it. Grayscale GBTC trading at ~30% discount to NAV is worth keeping an eye on.

Grayscale’s trusts intend to track the price of digital assets in a brokerage tradable equity. Today, both the GBTC trust (holding BTC) and ETHE (holding ETH) are trading at a discount to NAV. What does this mean, how did it happen and why should you care? 🧵⬇️ by @MattFiebach

A fact I found interesting in my research is, that there have been massive inflows to the Canadian spot $BTC

Has been interesting to see sustained inflows to the Canadian Purpose spot Bitcoin ETF. They’ve now added 11,350 BTC in the last 30 days; the most aggressive increase yet.

In my opinion, we are in a shakey spot in the market and I’ll be keeping my funds on the sidelines until we have more clarity on the finalized legislation. I’d assume based on all the info here, $ETH

and other alts will see their final shakeouts in the next month or two. 📉

If you’d like to hear further discussion on the topic, @samkazemian

will be joining us for episode #2 of @MarketCapping

! Plenty for us to discuss with legislation dropping the same day and a packed FRAX roadmap. Tune in!

We didn’t forget about you… Episode #2 of MarketCapping is right around the corner. Come hang out with us next Tuesday (6/7) @ 6PM EST. We will be going live on Twitch with the one and only @samkazemian from @fraxfinance! See you soon!🧢🧢

So my advice to you on how to play this.. I don’t have any, because none of this is financial advice. Do your own research and correct anything I have wrong, I’m not a macro expert. . Maybe keeps comments civil? I decided to tag a bunch of senators. Enjoy the weekend and GL! 👨‍🔬

We first talked about Nodel several months ago in an article here: Make Money with the Nodle IOT Crypto Phone App I know many readers of this website downloaded the app and have been running it on...

Continue Reading
link to How Many Employees Are Allocating Paycheck Portion to Bitcoin?