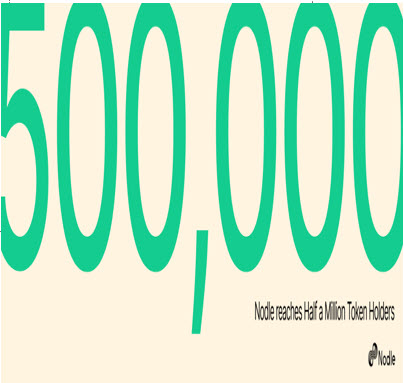 We first talked about Nodel several months ago in an article here: Make Money with the Nodle IOT Crypto Phone App I know many readers of this website downloaded the app and have been running it on their phone since the day that article was published. Many more readers of our new Plug and Play Crypto report have also downloded this app becasue it was one of the devices we featured.

Today Nodle announced it has reached 1/2 million users araound the world.
The article is belown and was fist published on medium.

Nodle Network has reached half a million token holders (as of August 1, 2022), bringing the project closer to the mission of empowering people to build the first smartphone-powered decentralized network. Having a mobile-first approach reduces the barrier to entry for users and allows anyone to quickly join the network as an antenna or “node” with no additional equipment requirement or prior knowledge.

In today’s world, do you know an adult who doesn’t have a smartphone? If you do, that person is the exception. It’s no longer accurate to say “mobile is the future.” The mobile future is here, and with over half a million token holders, Nodle expects to see a rapid increase in adoption as the market matures and users gain further understanding of blockchain technology and its capabilities.

Nodle brings Web3 to the physical world by leveraging the technology in smartphones to read sensors and devices that exist materially. The location of the device is only used to compute rewards based on contribution to network coverage and to locate Bluetooth devices at the request of their owners. The “nodes” (smartphones) are rewarded for providing network availability and connectivity. Building an ecosystem anyone can join with a resource they already own (their smartphones) is the key to Nodle’s commitment to inclusion and accessibility.

“According to Statista, the current number of smartphone users in the world today is 6.648 billion… 83.72% of the world’s population owns a smartphone… up considerably from 2016 when there were only 3.668 billion users, 49.40% of that year’s global population.”
– bankmycell.com

Web3 is the “read/write/own” revolution of the Internet in which users have a stake in and more control over their experiences online. The idea is that users “opt-in” instead of “opting out.” In contrast to the existing paradigm, on Web3, every participant has much more freedom and control over their digital life.

This shift for the Internet and society will empower people to be independent as they manage their finances, generate income, and even control and eventually own their data. But to really impact our daily lives, Web3 companies need to go to where the people are: their smartphones.

As of 2019, it was forecast that over 2 billion people accessed the internet via their smartphones alone. The World Advertising Research Center (WARC) has predicted that 72.6% of internet users or nearly 3.7 billion people will access the web via smartphones by 2025.

Li Jin, co-founder at Variant Fund, told The Defiant that because of the sheer amount of the world population that relies on mobile phones over desktop devices, she believes “there’s a huge potential to bring crypto to all smartphone users in the world. In many emerging markets, people only have access to phones rather than computers. We have to take off our US/Western hats and think about what are the use cases that perhaps emerging market users are going to want.”

To be truly global, accessible, and democratic, Web3 companies must look toward a mobile-first approach to reach this vast user base. More people use their smartphones than traditional desktop and laptop devices, and many only have access to smartphones.

Smartphones are, of course, “personal computers,” and very powerful computers at that. Web3 builders need to adopt a mobile-first approach to have maximum impact and achieve mass adoption across the globe. As noted above: nearly three out of four Internet users, or roughly 3.7 billion people, will access the web via smartphones by 2025.

Over Half a Million NODL Token Holders

, there are over half a million NODL holders at the time of writing (August 1, 2022). The Nodle Network is experiencing a first-mover advantage in terms of blockchain and mobile devices, as many Web3 companies have yet to develop and launch a native app. In time, this will be like a company going to market without a website — practically unthinkable today.

For a deep dive into the Nodle Economy, please refer to Nodle’s Tokenomics

and learn more about the project at nodle.com

is a decentralized network on Polkadot

that provides secure, low-cost connectivity and data liquidity to connect billions of devices worldwide. The Nodle network is powered by smartphones that earn Nodle (NODL) for providing network availability and connectivity. Nodle’s powerful stack allows uses to connect and secure physical assets, track lost or valuable items, capture sensor data, authenticate security certificates and more. Nodle provides insights for consumer electronics manufacturers, enterprises, smart cities, the finance industry, and beyond. Since its creation in 2017, Nodle has become one of the world’s largest wireless networks by number of base stations. To join, download the Nodle app for iOS